Life OK Please: A pit stop for those of you hurtling through life at break neck speed.

Though the archetypical image for feminism may look like Sweet Brown, she is not.

Ponder about the ideology behind this question for a minute. I ask you to do so because I don’t think I know the answer anymore. It seems like the world has taken what was to be a defence for the voiceless and transformed it into one gigantic farce. So really, what is feminism? Is it what Wikipedia states ; ‘a collection of movements and ideologies aimed at defining, establishing, and defending  equal political, economic, and social rights for women’ or is it something more than this? While debunking myths about the movement, the feminist ideology became clearer to me.

Myth #1: All feminists are women and all women are feminists.

Raja Rammohan Roy, the first man, man enough to stand up for women’s rights in India.

I couldn’t possibly think of a more incorrect statement! Some of the greatest feminists of all times have been men! Raja Rammohan Roy, a renowned social activist was known as the first feminist of India for his efforts to abolish sati and uplift the 19th century oppressed woman. You don’t have to be a girl to believe that both sexes should have equal rights. Many women voluntarily accept subjugation and oppression as part and parcel of their womanhood. 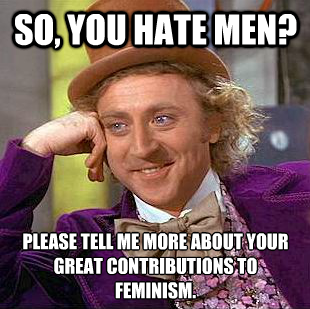 Sarcastic Wonka wonders if you were dropped on your head from a tree onto concrete pavement as a baby.

When did feminism become a man-hating joke? No more is it a progressive movement, but a move to make women superior.  Immature feminism dictates that women must not only be given equal rights, but are also far superior to men. Not only is this an irrational way to think, but also entirely defeats the purpose of the movement in the first place. Ruth Verma, a student of St. Xavier’s College says- “People need to understand that men and women are very different but that doesn’t mean they receive different treatment. Equal rights are meant for everybody That is what feminism is really about.”

Myth #3: Feminism is all about reservations. 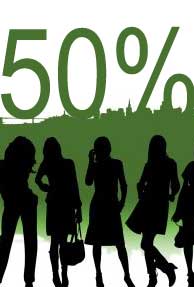 Reservations. The very word sparks a debate that I don’t want to indulge in. All I wish to emphasize is that we, as women need and want the world to know that what we receive- be it jobs, positions in educational institutions, etc. are on the basis of merit alone. Nikita Damle says, “Give us a chance to prove that we can, in fact, earn our place in this world on the basis of merit alone. Don’t grant us jobs just because we are women; give it to us because you know we’ll excel at whatever we choose to put our hands to.”

At the end of the day, we don’t really ask for much. According to Fawzia Khan, Feminism is all about recognizing a woman’s true worth- “We aren’t objects!”  Shalina Abhale echoes a similar sentiment, “I don’t want to restrict myself because of the lecherous attitude of certain men” and Alaric Moras says “Women have every right to independence and needn’t be set apart as unique or special; autonomy is theirs to command, granted them by every sensible soul in the world.” 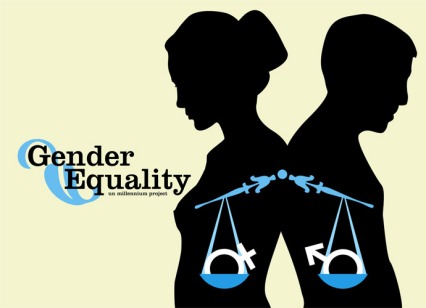 Our feminist philosophy is simple. We really don’t care about men holding the door open or pulling out chairs for us, we don’t care for any forced respect. But we certainly do care when that family friend remarks that a girl child is ‘an asset’ because she can cook, clean and serve food to guests. We’re tired of traditional gender roles and mistaken feminism in man hating movements. Feminism is the realization that women don’t deserve special treatment but that they just deserve equal treatment.  That is what mature feminism is, and what it should always be.

What We Write About